At last, MAE WEST gets an outstanding, intimate biography by a family member, her step-son, whose education she financed. This is Part 6 of 7.
• • “Mae West and the Count — — Love and Loss on the Vaudeville Stage” by Guido Roberto Deiro
• • Reviewed exclusively for The Mae West Blog by R. Mark Desjardins
• • "Smooch Around" created Clara Bow confusion • •
• • This mislabeled photo has been perpetuated by repeated publication. However, its incorrect use can be forgiven in light of the fact that a song sheet from 1913 for "Smooch Around" depicts a drawing of Mae West in this similar pose to Clara.
• • Smooch Around • • 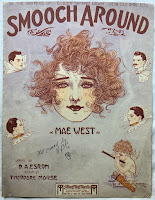 • • A second stumble is the author placing a fireplace for dramatic effect in Mae’s Ravenswood apartment where none, as serious Mae fans know, has ever existed.
• • Mae West shaped the facts of her career to be a smooth, uphill ride to the top. Many critics in the past have disputed information passed as fact. Guido Roberto Deiro has crafted a tender, honest and riveting account of his father and Mae intersecting at a time when Vaudeville was the only form of mass entertainment.
• • this memoir will be a revelation • • . . .
• • Mr. Desjardins’ book review will be concluded on the next post, which is Part 7.
• • Source: “Mae West and the Count” — — a biography by Guido Roberto Deiro. [Outskirts Press; published on 20 March 2019; 331 pages.]
• • On Sunday, 13 August 1922 in The N.Y. Daily News • •
• • "The Ginger Box Revue" was written to showcase Mae West's talents. But a feckless producer made off with the advances.
• • "Ginger Revue Now a Pepless Stew as Promoter Disappears" announced the New York Daily News [on Sunday, 13 August 1922]. Thirteen Equity actors sued producer Paul Dupont (a.k.a. Mr. Perkins) to recover their salaries — — but not Mae, who was to have received a percentage of the box office.
• • Overheard in Hollywood • •
• • Mae West will guest-star on the "Hollywood Hotel" show on April 26th, 1935.
• • In Her Own Words • •
• • Mae West said: "Of course, I like diamonds. And who doesn't?”
• • Mae West said: "I like to know that there are crowds passing in front of my place. I guess that's a left-over from New York — — but those great open spaces got on my nerves."
• • Quote, Unquote • •
• • A Chicago journalist mentioned Mae West.
• • J.R. Jones wrote: Remaking “Get Smart” without Don Adams and Barbara Feldon is like remaking “My Little Chickadee” without Mae West and W.C. Fields — meaning the best possible outcome is disappointment. …
• • Source: Chicago Reader; published in 2008
• • The evolution of 2 Mae West plays that keep her memory alive • •
• • A discussion with Mae West playwright LindaAnn LoSchiavo — —
• • http://lideamagazine.com/renaissance-woman-new-york-city-interview-lindaann-loschiavo/

• • The Mae West Blog celebrates its 15th anniversary • •
• • Thank you for reading, sending questions, and posting comments during these past fifteen years. Not long ago, we entertained 3,497 visitors. And we reached a milestone recently when we completed 4,200 blog posts. Wow!
• • By the Numbers • •
• • The Mae West Blog was started fifteen years ago in July 2004. You are reading the 4277th blog post. Unlike many blogs, which draw upon reprinted content from a newspaper or a magazine and/ or summaries, links, or photos, the mainstay of this blog is its fresh material focused on the life and career of Mae West, herself an American original.