MAE WEST was 43 years old in 1936 when Modern Screen decided to reveal how much weight she had gained since making her Tinseltown debut in 1932.
• • Mae West Item: Our spy at an exclusive Hollywood shoppe ("Spying done while you wait" is our motto) reports that Mae is growing.
• • When she first hit Hollywood, Mae slipped into lingerie marked size 14 and now, it is our duty to report, she must have size 18. It is heartening to add, though, that Mae still does things with an elegant touch. 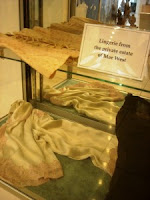 • • She never stoops to the gauchery of selecting her lingerie in person — it's all purchased by the Spanish gentleman who is her social secretary.
• • Source: Modern Screen, Vol. 14, No. 1; published in the issue dated for December 1936.
• • On Saturday, 19 August 1939 • •
• • It is rather difficult to see what Mae West or her advisers could detect in the famous Russian Empress which made her suitable for a Western impersonation. It is true that she was no angel and had a habit of inviting her male favorite for the time being "to come up and see her sometime." Anyhow, whatever the attraction or illusion may have been, Miss West seems to have abandoned the project.
• • Source:  Article: "News of Mae West" rpt in The Advertiser (Adelaide); published on Saturday, 19 August 1939.
• • Overheard in Hollywood • •
• • Exploited smartly, "Belle of the Nineties" should do Golden Mae West business even though repeat bookings may or may not be so abundant.
• • In Her Own Words • •
• • Mae West said: “Personally, I like two types of men — domestic and foreign.”
• • Mae West said: "I can't see myself horsing around with hockey players in a business way. It would make me feel unappealing. Any time I show my authority over the male sex, it's got to be 100 percent emotional."
• • Quote, Unquote • •
• • The Daily Variety mentioned Mae West.
• • Mae West Cartoon • •
• • Mae West will appear under the Hearst label shortly in a new comic strip. Cartoons will feature wisecracks, with Miss West doing the cracking.
• • Strip will be syndicated by King Features under a deal being arranged for Miss West by the William Morris office. …
• • Source: Variety, New York; published on Wednesday, 10 April 1935
• • The evolution of 2 Mae West plays that keep her memory alive • •
• • A discussion with Mae West playwright LindaAnn LoSchiavo — —
• • http://lideamagazine.com/renaissance-woman-new-york-city-interview-lindaann-loschiavo/

• • The Mae West Blog celebrates its 15th anniversary • •
• • Thank you for reading, sending questions, and posting comments during these past fifteen years. Not long ago, we entertained 3,497 visitors. And we reached a milestone recently when we completed 4,200 blog posts. Wow!
• • By the Numbers • •
• • The Mae West Blog was started fifteen years ago in July 2004. You are reading the 4282nd blog post. Unlike many blogs, which draw upon reprinted content from a newspaper or a magazine and/ or summaries, links, or photos, the mainstay of this blog is its fresh material focused on the life and career of Mae West, herself an American original.