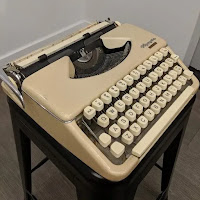 • • Mae West, born in Brooklyn, started performing young, in vaudeville and jazz clubs and small parts in Broadway revues, but it was the plays she penned herself, under the pseudonym Jane Mast, that brought her to fame.
• • A typewriter from 1959 • • . . .
• • To be continued on the next post.
• • Source: American Writers Museum; posted on Tuesday, 13 August 2019.
• • On Monday, 22 August 1932 • •
• • On this date production began for the motion picture "Night After Night," which offered Mae West her first chance to be in pictures.
• • Overheard in Hollywood • •
• • Perhaps surprisingly, Miss West deplores the current film trend toward sex and nudity.
• • In Her Own Words • •
• • Mae West said: "A dame that knows the ropes isn't likely to get tied up."
• • Mae West said: "Woman is capable of more trickery than man ever dreamed of. I am not defending the tricky woman, but if she is forced to battle for the place due to her, she cannot be condemned for using any ruse she can."
• • Quote, Unquote • •
• • An article about a fundraiser mentioned Mae West.
• • Jodie Jacobs wrote:  Sonny returned to Cher, and W.C. Fields paired up again with Mae West, and it was all for a good cause. The star look-alikes were among the 130 people who turned out last weekend for the Lake County Family YMCA Scholarship Fund's movie-couple-themed "A Night to Remember V" at Midlane Country Club in Wadsworth.  . . .
• • Source: Article: "The Stars Come Out" written by Jodie Jacobs for Chicago Tribune; published on 21 August 1994
• • The evolution of 2 Mae West plays that keep her memory alive • •
• • A discussion with Mae West playwright LindaAnn LoSchiavo — —
• • http://lideamagazine.com/renaissance-woman-new-york-city-interview-lindaann-loschiavo/

• • The Mae West Blog celebrates its 15th anniversary • •
• • Thank you for reading, sending questions, and posting comments during these past fifteen years. Not long ago, we entertained 3,497 visitors. And we reached a milestone recently when we completed 4,200 blog posts. Wow!
• • By the Numbers • •
• • The Mae West Blog was started fifteen years ago in July 2004. You are reading the 4285th blog post. Unlike many blogs, which draw upon reprinted content from a newspaper or a magazine and/ or summaries, links, or photos, the mainstay of this blog is its fresh material focused on the life and career of Mae West, herself an American original.