The best reason to go to Canada next summer is that MAE WEST is coming to town.
• • Mae West was praised by George Bernard Shaw, who had shown a tolerant view of prostitution in his 1907 play “Mrs. Warren’s Profession.” In fact, James Montgomery Flagg illustrated an article about G.B.S.’s controversial drama that was published in The Los Angeles Times showing Mae West yanking Shaw's beard.
• • The venerable Shaw Festival has just announced this: Old favourites, impressive newcomers and at least one Stratford Festival legend will be on the Shaw Festival's four stages next season. And Diana Donnelly and Julia Course have been cast in Mae West's "Sex."
• • "Sex" Mae West’s scandalously funny play asks: if Mr Right doesn’t know that you are Miss Wrong, should you break his heart or live a lie?
• • Where: Jackie Maxwell Studio Theatre, 10 Queen’s Parade, Niagara-on-the-Lake, Ontario, Canada
• • When: June 21 — October 13, 2019
• • The Shaw Festival has three theatres, two within the same building and one in downtown Niagara-on-the-Lake, a short walk from the main theatre.
• • On Sunday, 8 November 1931 in Brooklyn • •
• • The Brooklyn Daily Eagle recalled in its archives that on Sunday, 8 November 1931 Mae West performed her play "The Constant Sinner" in Brooklyn's Majestic Theatre.
• • Overheard in Hollywood • • 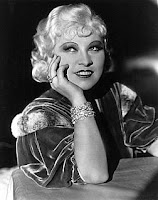 • • Laurels to Mae West — For her outstanding personality. Whether you approve of her, or not, you simply cannot ignore her.
• • In Her Own Words • •
• • Mae West said: "You see the speakeasy influence. Sit at a table, dearie, I always say. And don't forget your frills and ruffles and anything else that feminizes you."
• • Quote, Unquote • •
• • An article about former vaudevillians mentioned Mae West.
• • And in 1912, at the Model Theatre in Philadelphia, an actress was getting considerable attention because "she does a muscle dance in a sitting position. It is all in the way she does it and her way is all her own. Her name: Mae West.  …
• • Source: Rocky Mount Sunday Telegram; published on Sunday, 11 November 1951
• • The evolution of 2 Mae West plays that keep her memory alive • •
• • A discussion with Mae West playwright LindaAnn LoSchiavo — —
• • http://lideamagazine.com/renaissance-woman-new-york-city-interview-lindaann-loschiavo/

• • The Mae West Blog celebrates its 14th anniversary • •
• • Thank you for reading, sending questions, and posting comments during these past fourteen years. Not long ago, we entertained 3,497 visitors. And we reached a milestone recently when we completed 4,000 blog posts. Wow!
• • By the Numbers • •
• • The Mae West Blog was started fourteen years ago in July 2004. You are reading the 4079th blog post. Unlike many blogs, which draw upon reprinted content from a newspaper or a magazine and/ or summaries, links, or photos, the mainstay of this blog is its fresh material focused on the life and career of Mae West, herself an American original.