Mae West: Friend to the End

The friendship between MAE WEST and Dolly Dempsey (who died on Thursday, 2 November 2006) is well-known. Learn more about this life-long friend today.  This is Part 2 of two parts.
• • Dolly Dempsey [24 November 1917 — 2 November 2006] • •
• • Loving friendship with Mae West • •
• • Her loving friendship with Mae West began when Dolly was in high school at Our Lady of Peace Academy. This friendship continued throughout her adult years.
• • Dolly was always thankful that she could be with Mae West at her bedside when her friend died.
• • At the age of 51, Dolly graduated from San Diego State University.
• • One of the greatest gifts she left her brothers and sisters were the volumes of family history she wrote and traced back to the early 1800s. Dolly and her husband, Don, traveled extensively; the happiest trips were to Hawaii to visit our Hawaiian Clan, family of our deceased brother James and his wife Alena. Dolly is survived by her husband, Donald, brothers Hugh Lyons and (wife Gerry) and Charles Lyons (wife Bernice), two sisters Evelyn Williams (husband Sam) and Joan Busalacchi (husband Cosimo), along with many loving nieces and nephews. Dolly was the glue that held our family together.
We love you and will miss you forever.
• • Services for Dolly Dempsey were held on Wednesday, 8 November 2006 at Blessed Sacrament Church. Burial was at Holy Cross Cemetery.
• • Source: The San Diego Union Tribune; published on Tuesday, 7 November 2006.
• • Texas Guinan [12 January 1884 — 5 November 1933] • •

• • Born in Waco, Texas on 12 January 1884, Mary Louise Cecilia "Texas" Guinan played a gun-slinger and rode bareback in silent films, took New York by storm in 1906, and earned a salary of $700,000 as a speakeasy hostess. The versatile stage star led a noisy and joyful life at full speed until Sunday, 5 November 1933. One month later, Prohibition was repealed.
• • A good friend to Mae West who invested in her Broadway shows, Texas also held seances with her.
• • Texas Guinan is one of several strong roles for actresses in the play "Courting Mae West" based on true events during the Prohibition Era.  Producers and aspiring stars, take note.
• • On Wednesday, 5 November 1930 • •
• • "A prizefighter's tart" who enjoys black men as well as Caucasians, Babe Gordon, the frisky blonde teenage protagonist, was Mae's idea of an uptown temptress, footloose, fearless, and unfettered in Harlem.
• • The novel "Babe Gordon" by Mae West was published in New York City by The Macaulay Company on Wednesday, 5 November 1930.
• • Overheard in Hollywood • •
• • Mae West's chauffeur, Albert "Chalky" Wright, was a former boxer who in 2003 was placed on The Ring magazine's list of 100 greatest punchers of all time.
• • In Her Own Words • •
• • Mae West said:  "First impressions are what count. It's like when you arrive at a party. That's when people take a real look at you, and if they're impressed, that's how they think of you. If your makeup fades and you get creases in your dress later, that isn't what they remember."
• • Quote, Unquote • • 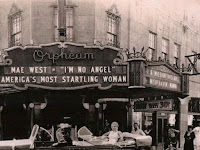 • • An Arizona site mentioned Mae West's visit to a downtown movie house.
• • Historic photos of downtown Phoenix, Arizona • •
• • Photo: Referred to by the Phoenix newspaper reporters as "that startling woman," movie star Mae West appears in a convertible right in front of the Orpheum Theatre in downtown Phoenix to promote her latest motion picture, "I'm No Angel,"  in 1933.
• • Source: rpt in AZCentral.com; published on Wednesday, 6 August 2014
• • The evolution of 2 Mae West plays that keep her memory alive • •
• • A discussion with Mae West playwright LindaAnn LoSchiavo — —
• • http://lideamagazine.com/renaissance-woman-new-york-city-interview-lindaann-loschiavo/

• • The Mae West Blog celebrates its 14th anniversary • •
• • Thank you for reading, sending questions, and posting comments during these past fourteen years. Not long ago, we entertained 3,497 visitors. And we reached a milestone recently when we completed 4,000 blog posts. Wow!
• • By the Numbers • •
• • The Mae West Blog was started fourteen years ago in July 2004. You are reading the 4077th blog post. Unlike many blogs, which draw upon reprinted content from a newspaper or a magazine and/ or summaries, links, or photos, the mainstay of this blog is its fresh material focused on the life and career of Mae West, herself an American original.