The friendship between MAE WEST and Dolly Dempsey (who died on Thursday, 2 November 2006) is well-known. Learn more about this life-long friend today. There's so much that most people don't know about Dolly.  This is Part 1 of two parts.
• • Dolly Dempsey [24 November 1917 — 2 November 2006] • •
• • Margaret Anne (Dolly) Lyons Dempsey, who was born in Newark, New Jersey, was the oldest child of six children of James and Marguerite Lyons.
• • Dolly spent many years working at the San Diego County Health Department, then went on to work for Dean Whitter, and finally as the secretary to Dr. Love, President of San Diego State University. She was one of the Charter Members of the S.D. Humane Society's Women's Auxiliary and spent many years helping with the various activities they hosted. She was an adamant supporter of those organizations that fought for animal rights.
• • Loving friendship with Mae West • •
• • Her loving friendship with Mae West began when Dolly was in high school at Our Lady of Peace Academy. This friendship continued throughout her adult years.
• • The second half will be posted on Monday.
• • Source: The San Diego Union Tribune; published on Tuesday, 7 November 2006.
• • On Friday, 2 November 1990 • • 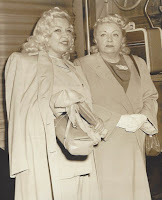 • • Musician Klaus Schulze recorded a long track "Face of Mae West" [08:04] for a sampler CD titled "Dalí: The Endless Enigma" and this cut was first released on 2 November 1990 on the Coriolis label.
• • Overheard in Hollywood • •
• • Alice Brady, a daughter of an eminent Broadway producer who waged a battle against censorship, was featured in one motion picture with Mae West.
• • In Her Own Words • •
• • Mae West said:  “The only other person I know who could write his own movies and star in them was Chaplin. When I had my act with the muscle men in Las Vegas they gave me a diamond bracelet after a two-week run. When they do that you know you're making money for them.”
• • Quote, Unquote • •
• • A California paper mentioned Mae West.
• • But if your fat is your fortune, as in the case of Mae West, that’s a different story! . . .
• • Source: Item in Sausalito News; published on Friday, 2 November 1934
• • The evolution of 2 Mae West plays that keep her memory alive • •
• • A discussion with Mae West playwright LindaAnn LoSchiavo — —
• • http://lideamagazine.com/renaissance-woman-new-york-city-interview-lindaann-loschiavo/

• • The Mae West Blog celebrates its 14th anniversary • •
• • Thank you for reading, sending questions, and posting comments during these past fourteen years. Not long ago, we entertained 3,497 visitors. And we reached a milestone recently when we completed 4,000 blog posts. Wow!
• • By the Numbers • •
• • The Mae West Blog was started fourteen years ago in July 2004. You are reading the 4076th blog post. Unlike many blogs, which draw upon reprinted content from a newspaper or a magazine and/ or summaries, links, or photos, the mainstay of this blog is its fresh material focused on the life and career of Mae West, herself an American original.