MAE WEST worked with, collaborated with, and duked it out in court with Jack Linder as well as his brother Mark Linder, who died on Thursday, 9 November 1950 at age 69, according to this obituary in Variety.
• • Mark Linder [1881 — 9 November 1950] • •
• • Mark Linder, 69, actor, playwright, and producer, died after a heart attack in New York City on November 9th. He had been suffering from a heart ailment for several years and collapsed while alighting from a bus on the way to his home. He was the brother of Jack Linder, a former independent vaude booker, and currently producer of the Bowery Music Hall tele show on WOR-TV.
• • Born in New York, Mark Linder entered show business as a kid actor and later appeared in a succession of melodramas produced by A. H. Woods and others. He later diverted to writing and appeared in vaudeville in a series of protean playlets, which he wrote, under the direction of Roland B. West. 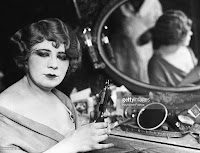 • • Mark Linder had also authored a number of plays, several of which were produced by his brother, Jack. Best known of these was the Mae West starrer, “Diamond Lil,” which reputedly had been fashioned from his play, “Chatham Square,” but revised by Miss West.
• • He also appeared in this one under the management of his brother. However, neither of the Linder brothers have any participation in the current revival of the play.
• • Among his other plays produced in New York City on Broadway were “The Squealer,” “Triplets,” ‘‘The Honor Code," and “Summer Wives.”
• • Source: Variety; published on Wednesday, 15 November 1950.
• • On Tuesday, 9 November 1920 • •
• • Mae filed for divorce from Guido Deiro on the grounds of adultery on 14 July 1920. The divorce was granted by the Supreme Court of the State of New York on Tuesday, 9 November 1920. Guido almost immediately re-married for the third time. Mae later said, "Marriage is a great institution. But I'm not ready for an institution."
• • Overheard in Hollywood • •
• • During the revival of ”Diamond Lil,” Maurice Touret has taken over the flack [publicist] post for Mae West, replacing Joe Flynn.
• • In Her Own Words • •
• • Mae West said: "I'm my own original creation."
• • Mae West said: “Nothing succeeds like excess.”
• • Quote, Unquote • •
• • The Times Picayune mentioned Mae West.
• • “Nick LaRocca played for Mae West and Gilda Gray to Shimmy” • •
• • D. James "Nick" LaRocca, leader and manager of the Original Dixieland Jazz band (now in retirement) writes that "I not only played for Gilda Gray to shimmy, but also accompanied Mae West. I was amused reading 'Up and Down the Street' regarding Gilda Gray, introducing the shimmy into New York City." LaRocca writes. "You should have asked your historian (me) on these matters."  …
• • Source: Item in The Times Picayune; published on Tuesday, 19 June 1956
• • The evolution of 2 Mae West plays that keep her memory alive • •
• • A discussion with Mae West playwright LindaAnn LoSchiavo — —
• • http://lideamagazine.com/renaissance-woman-new-york-city-interview-lindaann-loschiavo/

• • The Mae West Blog celebrates its 14th anniversary • •
• • Thank you for reading, sending questions, and posting comments during these past fourteen years. Not long ago, we entertained 3,497 visitors. And we reached a milestone recently when we completed 4,000 blog posts. Wow!
• • By the Numbers • •
• • The Mae West Blog was started fourteen years ago in July 2004. You are reading the 4080th blog post. Unlike many blogs, which draw upon reprinted content from a newspaper or a magazine and/ or summaries, links, or photos, the mainstay of this blog is its fresh material focused on the life and career of Mae West, herself an American original.