On Tuesday, 10 November 1931, a daily New York City columnist gave his readers a close up glimpse of MAE WEST. What he wrote in 1931 about the stage performer will surprise you. This is Part 1.
• • New York Day By Day — — O. O. McIntyre • •
• • NEW YORK. Nov. 10th — — Mae West has become Broadway’s greatest enigma — — the bad good little lady. As she said in a curtain speech: "I hope you do not think I’m like the roles I portray. I neither smoke nor drink.” And added with coy wistfulness: "In fact I'm just a campfire girl."
• • To see Miss West swagger through the hard-boiled sophistries of her half world dramas, it is quite easy to visualize her as a product of the seamy side. There are thousands of Mae West stage types in real life, blond mistresses who live hard, dangerously and by the help of shyster accomplices.
• • Yet those who know say she is merely a brilliant young lady, with the brilliance, perhaps, of the electric light, who has capitalized sins of the world to wear as a cloak and to discard as easily. Off the stage, she is a mild-mannered home body.
• • The emergence of the Brooklyn bombshell • •  . . .
• • To be continued on the next post.
• • Source: Syndicated column; published on Tuesday, 10 November 1931.
• • On Thursday, 12 November 1964 • •
• • Hal Humphrey's article, "Charlie and Mae Together Again," ran in The Los Angeles Times on Thursday, 12 November 1964.
• • Overheard in Hollywood • •
• • Mae West, Steve Cochran believes, is the finest exponent of timing. "I never ceased to be amazed by Mae.”
• • In Her Own Words • •
• • Mae West said:  ''I'm having fun with my career, and I want to enjoy it.''
• • Quote, Unquote • • 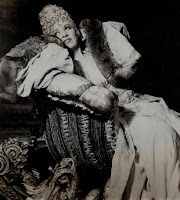 • • The Daily Variety mentioned Mae West.
• • At curtain time producer Mike Todd was in Madison Square Garden the first night, looking at the fights, but the lure of the debut was too strong and at intermission he was back at the Winter Garden, asking friends what they thought of the show.
• • He departed for the West Coast on Monday (31 January 1944) to huddle with Mae West over their planned production of "Catherine Was Great," but he proposes doing an operetta first. Mike Todd also has dates with picture execs in Hollywood.  ...
• • Source: Variety; published on Tuesday, 1 February 1944
• • The evolution of 2 Mae West plays that keep her memory alive • •
• • A discussion with Mae West playwright LindaAnn LoSchiavo — —
• • http://lideamagazine.com/renaissance-woman-new-york-city-interview-lindaann-loschiavo/

• • The Mae West Blog celebrates its 14th anniversary • •
• • Thank you for reading, sending questions, and posting comments during these past fourteen years. Not long ago, we entertained 3,497 visitors. And we reached a milestone recently when we completed 4,000 blog posts. Wow!
• • By the Numbers • •
• • The Mae West Blog was started fourteen years ago in July 2004. You are reading the 4081st blog post. Unlike many blogs, which draw upon reprinted content from a newspaper or a magazine and/ or summaries, links, or photos, the mainstay of this blog is its fresh material focused on the life and career of Mae West, herself an American original.