A cunning cartoon showed MAE WEST yanking G.B. Shaw's beard. If only the two controversial writers could chat during Shaw Fest, which is presenting “Sex” in Canada. Toronto drama critic Karen Fricker has critiqued the play. This is Part 7 of 9 segments.
• • Shaw Festival gives Mae West’s 1926 play “Sex” a thrillingly modern sensibility • •
• • whether this is scandalous today • •
• • Karen Fricker wrote: This production places two women in this embrace and invites consideration of whether this is scandalous today, in societal or theatrical terms.
• • Karen Fricker wrote: The other major role that’s cast against gender expectation is the vulnerable prostitute Agnes, played with tremulous poise by Jonathan Tan. The identities of feminized Asian male and disempowered female layer onto each other, and this complexity cuts through the character’s melodramatic story arc.
• • Karen Fricker wrote: I’m making this sound serious and complicated (and it is), but there’s a lot of entertainment too.
• • Karen Fricker wrote: After the somewhat overlong Montreal-set first act, Margy seeks out her fresh start in Trinidad and the production erupts into a series of musical numbers featuring cross-dressed Black performers (Cameron Grant, Monice Peter) as Latin conga dancers and a powerful woman (Allegra Fulton) as the MC.
• • an odd glitch • •  . . .
• • This review by Karen Fricker will be continued on the next post.
• • Source: Opinion, Toronto Star; published on Monday, 8 July 2019.
• • On Sunday, 18 October 1931 • • 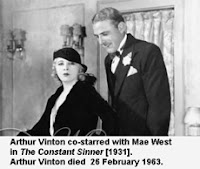 • • The Herald Tribune reviewed Mae's Harlem play “The Constant Sinner” on Sunday, 18 October 1931.
• • Overheard in Hollywood • •
• • Boxing is in Mae West's blood.
• • In Her Own Words • •
• • Mae West said: "When you make the right demands, the studios are delighted."
• • Quote, Unquote • •
• • Architectural Digest mentioned Mae West.
• • The Story Behind Dalí's Iconic Lips Sofas • •
• • How Mae West’s pout sparked a Surrealist sensation • •
• • Hannah Martin wrote: Around 1935, Spanish artist Salvador Dalí saw something special in the face of movie star Mae West: an apartment. In a watercolor, he turned her blonde curls into portières, her eyes into paintings, her nose into a fireplace, and her lips into a divan. The last was a furnishing so provocative that British arts patron Edward James requested a three-dimensional version.  …
• • Source: Architectural Digest; published on Monday, 2 September 2019
• • The evolution of 2 Mae West plays that keep her memory alive • •
• • A discussion with Mae West playwright LindaAnn LoSchiavo — —
• • http://lideamagazine.com/renaissance-woman-new-york-city-interview-lindaann-loschiavo/

• • The Mae West Blog celebrates its 15th anniversary • •
• • Thank you for reading, sending questions, and posting comments during these past fifteen years. Not long ago, we entertained 3,497 visitors. And we reached a milestone recently when we completed 4,300 blog posts. Wow!
• • By the Numbers • •
• • The Mae West Blog was started fifteen years ago in July 2004. You are reading the 4326th blog post. Unlike many blogs, which draw upon reprinted content from a newspaper or a magazine and/ or summaries, links, or photos, the mainstay of this blog is its fresh material focused on the life and career of Mae West, herself an American original.