A cunning cartoon showed MAE WEST yanking G.B. Shaw's beard. If only the two controversial writers could chat during Shaw Fest, which is presenting “Sex” in Canada. Toronto drama critic Karen Fricker has critiqued the play. This is Part 8 of 9 segments.
• • Shaw Festival gives Mae West’s 1926 play “Sex” a thrillingly modern sensibility • •
• • an odd glitch • •
• • Karen Fricker wrote: Impressive throughout, Sharp’s costumes are almost impossibly gorgeous here, with Donnelly appearing in a series of spectacular white gowns that deliberately over-telegraph her attempt to perform virtue and legitimacy. While all design elements of the production are top notch (including Bonnie Beecher’s lights and Ryan deSouza’s music direction), there’s an odd glitch in one of the musical numbers in which Fulton has to navigate a comic prop piece that looks unsafe.
• • Karen Fricker wrote: The action then moves to upper-crust Connecticut, where a subplot involving a society matron (Fiona Byrne), her husband (Ric Reid) and Margy’s pimp, Rocky (Kristopher Bowman), folds into the main story of the Margy/Jimmy romance, as does Margy’s romantic entanglement with the persuasive naval lieutenant Gregg (André Sills).
• • Once a sex worker, always a sex worker? • • . . .
• • This review by Karen Fricker will be concluded on the next post.
• • Source: Opinion, Toronto Star; published on Monday, 8 July 2019.
• • On Tuesday, 21 October 1947 • •
• • It was on Tuesday, 21 October 1947 that Mae West first set foot in a playhouse in Manchester, England to present her Bowery melodrama "Diamond Lil."
• • Overheard in Hollywood • • 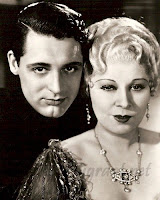 • • The National Legion of Decency was formed in October of 1933, six months after the release of Mae's feature film "She Done Him Wrong."  Legion officials cited Mae West and the film as one of the major reasons for the "necessity" of the organization.
• • In Her Own Words • •
• • Mae West said: "Those who are easily shocked should be shocked more often."
• • Mae West said: "Love isn't an emotion or an instinct — — it's an art."
• • Quote, Unquote • •
• • Westchester Magazine mentioned Mae West.
• • Westchester Magazine wrote:  The Tarrytown Music Hall—This 843-seat Queen Anne-style theater is one of only 6 percent of all US theaters built before 1900. In 1976, the village proposed the structure be demolished to make room for a parking lot, but it was saved by the nonprofit The Friends of the Mozartina Musical Arts Conservatory and placed on the National Register for Historic Places in 1980. The eclectic lineup of performers and speakers that have graced its stage include Mae West, Woodrow Wilson, Gregg Allman, and Joan Rivers.  …
• • Source: Westchester Magazine; published on Thursday, 16 October 2014
• • The evolution of 2 Mae West plays that keep her memory alive • •
• • A discussion with Mae West playwright LindaAnn LoSchiavo — —
• • http://lideamagazine.com/renaissance-woman-new-york-city-interview-lindaann-loschiavo/

• • The Mae West Blog celebrates its 15th anniversary • •
• • Thank you for reading, sending questions, and posting comments during these past fifteen years. Not long ago, we entertained 3,497 visitors. And we reached a milestone recently when we completed 4,300 blog posts. Wow!
• • By the Numbers • •
• • The Mae West Blog was started fifteen years ago in July 2004. You are reading the 4327th blog post. Unlike many blogs, which draw upon reprinted content from a newspaper or a magazine and/ or summaries, links, or photos, the mainstay of this blog is its fresh material focused on the life and career of Mae West, herself an American original.