MAE WEST spent time in Pennsylvania performing as well as being quite creative, which included finding collaborators. One very accommodating individual was C. William Morganstern, the former proprietor of Pittsburgh’s Family Theater where, as a teenage vaudevillian, Mae had been booked in 1912. And in 1926, in exchange for his assuming the responsibilities of the producer of "Sex," William’s daughter Constance Morganstern was cast in this Broadway play as Marie.
• • On October 25 and 26, 2019 in Pennsylvania • •
• • Mae West will be seen in a two-night performance: “Calling All Spirits”
• • Artistic Director Robert Brock will don his high heels to bring Mae West, Judy Garland, Liza Minnelli, and Bette Midler to the stage of the Lancaster Marionette Theatre. In Brock’s uncanny impression of Theresa Caputo, the Long Island Medium, she will read the audience and call up the spirit of her fellow Long Island resident, Little Edie of Grey Gardens fame.
• • The legendary Billie Holiday is expected to materialize in marionette form during this Halloween spectacle. Brock’s latest dame, Bette Davis playing Baby Jane Hudson, will end the spirited evening battling with her sister, Blanche, and attempting her long overdue comeback to the stage.
• • Where: Lancaster Marionette Theatre, 126 North Water St., Lancaster, PA; 7 PM showtime.
• • On Saturday, 9 October 1948 • •
• • If you were reading The Los Angeles Times on Saturday, 9 October 1948, then you would have seen this headline: "Writers Ask Retrial in $100,000 Suit Against Mae West."
• • As Mae would have said of these two scribblers who challenged her in court, "The nerve of a brass monkey."
• • Overheard in Hollywood • • 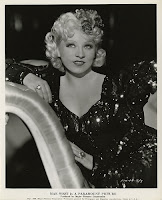 • • “Go West Young Man” is an Emanuel Cohen Production. This story is the stage play “Personal Appearance” that ran for more than a year on Broadway and is a natural for Mae West.
• • In Her Own Words • •
• • Mae West said: “My fans don’t want Mae West to have problems and have to struggle. To them. Mae West always triumphs.”
• • Quote, Unquote • •
• • Motion Picture Herald mentioned Mae West.
• • “Klondike Annie” — — Mae West, Victor McLaglen — We failed to do the business on this Mae West picture that we have with previous ones. They seem to be falling out with Mae. This one is about as good as any she has made and nothing indecent. Running time, 81 minutes. Played on March 26-27. — Alice Simmons, Lyric Theatre, Jefferson, Texas. General patronage. …
• • Source: Motion Picture Herald; published on Saturday, 23 May 1936
• • The evolution of 2 Mae West plays that keep her memory alive • •
• • A discussion with Mae West playwright LindaAnn LoSchiavo — —
• • http://lideamagazine.com/renaissance-woman-new-york-city-interview-lindaann-loschiavo/

• • The Mae West Blog celebrates its 15th anniversary • •
• • Thank you for reading, sending questions, and posting comments during these past fifteen years. Not long ago, we entertained 3,497 visitors. And we reached a milestone recently when we completed 4,300 blog posts. Wow!
• • By the Numbers • •
• • The Mae West Blog was started fifteen years ago in July 2004. You are reading the 4319th blog post. Unlike many blogs, which draw upon reprinted content from a newspaper or a magazine and/ or summaries, links, or photos, the mainstay of this blog is its fresh material focused on the life and career of Mae West, herself an American original.