Was MAE WEST really misquoted? Let’s find out. This is Part 5 of eight sections.
• • 1930s sex symbol Mae West has been misquoted for decades, book reveals • •
• • Famous for Mae West’s witty zingers • •
• • Stephanie Nolasco wrote: According to Mark Vieira, “She Done Him Wrong” is still famous for West’s witty zingers, but its most famous line – “Why don’t you come up and see me sometime?” – has been misquoted over the years. The line that West actually purred to Grant is “Why don’t you come up sometime and see me?" 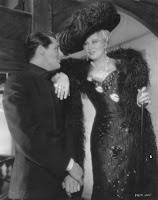 • • Stephanie Nolasco wrote: “The misquote was happening right after the film,” said Vieira. “It just worked on many levels.”
• • Stephanie Nolasco wrote:  Mark Vieira observed that audiences were immediately captivated by West, whose hourglass figure was draped in sheer, curve-hugging, diamond-embellished gowns that proudly flaunted her assets.
• • one of Hollywood’s biggest sex symbols • • …
• • This article by Stephanie Nolasco will be continued on the next post.
• • Source: Fox News; published on Wednesday, 4 September 2019.
• • Starting on Monday, 24 September 1928 • •
• • "Pleasure Man" written by Mae West was shown at the Bronx Opera House from 17 September until 22 September 1928.  Then the play moved to the Boulevard Theatre in Queens for a single week starting on Monday, 24 September 1928.  Then Mae's provocative piece opened at the Biltmore Theatre on Broadway on 1 October 1928, at which point the police padlocked it, despite its heavy advance sale.
• • The stage play "Courting Mae West" dramatizes the police raid and the aftermath.
• • Overheard in Hollywood • •
• • Mae West gives us good entertainment. That’s what we are interested in, not whether she is a bachelor girl, a spinster or a divorcee.
• • In Her Own Words • •
• • Mae West said: "She who laughs lasts."
• • Quote, Unquote • •
• • The Daily Variety mentioned Mae West.
• • Mae West will air quips from her new film, 'Goin' to Town,' on Hollywood Hotel program over CBS on April 26. Paul Cavanaugh, who also appears in the picture, will broadcast with the star. …
• • Source: Variety; published on Wednesday, 24 April 1933
• • The evolution of 2 Mae West plays that keep her memory alive • •
• • A discussion with Mae West playwright LindaAnn LoSchiavo — —
• • http://lideamagazine.com/renaissance-woman-new-york-city-interview-lindaann-loschiavo/

• • The Mae West Blog celebrates its 15th anniversary • •
• • Thank you for reading, sending questions, and posting comments during these past fifteen years. Not long ago, we entertained 3,497 visitors. And we reached a milestone recently when we completed 4,300 blog posts. Wow!
• • By the Numbers • •
• • The Mae West Blog was started fifteen years ago in July 2004. You are reading the 4308th blog post. Unlike many blogs, which draw upon reprinted content from a newspaper or a magazine and/ or summaries, links, or photos, the mainstay of this blog is its fresh material focused on the life and career of Mae West, herself an American original.