A cunning cartoon showed MAE WEST yanking G.B. Shaw's beard. If only the two controversial writers could chat during Shaw Fest, which is presenting “Sex” in Canada. Broadway World sent Michael Rabice to review it. This is Part 5 of 9 segments.
• • BWW Review: SEX is Alive and Well at Shaw Festival • •
• • wrapped in a handsome package • •
• • Michael Rabice wrote: Kristopher Bowman is Rocky, the kingpin who claims to own LaMont, but would sell his sister for more cocaine. Bowman exudes sliminess wrapped in a handsome package. Andre Sills is the burly Gregg, ready to steal LaMont away and keep her as his own for life. Mr. Sills brings a humanity to the play that isn't formed from a cookie cutter mold. He is earnest in his desires for LaMont. 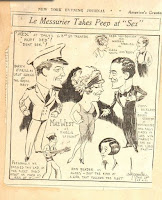 • • Michael Rabice wrote: Fiona Byrne turns in a classy performance as the socialite Clara, who briefly runs away from upper class society for a fling. Her downward spiral after being plied with alcohol and drugs is utterly believable. But Mae West creates a brilliant surprise when the tables turn in ACT IV, and LaMont is hurled into Clara's world.
• • Peter Hinton has included musical numbers • •  . . .
• • Mr. Radice’s stage review continues on the next post.
• • Source: BWW Review; published on Friday, 2 August 2019.
• • On Friday, 9 September 1927 in Variety • •
• • Variety was not impressed with Mae West's harmonica playing in "The Wicked Age."  They were not amused by "Satisfied" nor the other songs she thought up like "My Baby's Kisses."  But the most startling element was her racy, tummy-tossing physicality.  Variety reprimanded her in their review: "Miss West is getting away at $3.85 with something the [burlesque] wheels don't dare at $1.65." [Variety's issue dated for Friday, 9 September 1927.]
• • Overheard in Hollywood • •
• • Mae West, both the actress and the life-jacket named for her, are being given a sound chance of being known to posterity.
• • In Her Own Words • •
• • Mae West said: “I’m my own child.”
• • Quote, Unquote • •
• • The Hollywood LOW-DOWN mentioned Mae West.
• • Songs are written not only for pictures, but to suit the player in question. And this is a real problem at Paramount where more than a dozen singers are under contract.
• • Bing Crosby, Lanny Ross, Joe Morrison, Mae West, Kitty Carlisle, Helen Jepson, Gladys Swarthout, Mary Ellis, Queenie Smith, Carl Brisson, Ben Bernie, Iris Adrian and Lydia Roberti all are noted for their singing as well as their acting. And each requires a different type of song. Something suitable for Crosby wouldn’t do for Brisson. And Kitty Carlisle couldn’t sing a song written for Mae West. …
• • Source: The Hollywood LOW-DOWN; published on Tuesday, 15 January 1935
• • The evolution of 2 Mae West plays that keep her memory alive • •
• • A discussion with Mae West playwright LindaAnn LoSchiavo — —
• • http://lideamagazine.com/renaissance-woman-new-york-city-interview-lindaann-loschiavo/

• • The Mae West Blog celebrates its 15th anniversary • •
• • Thank you for reading, sending questions, and posting comments during these past fifteen years. Not long ago, we entertained 3,497 visitors. And we reached a milestone recently when we completed 4,200 blog posts. Wow!
• • By the Numbers • •
• • The Mae West Blog was started fifteen years ago in July 2004. You are reading the 4297th blog post. Unlike many blogs, which draw upon reprinted content from a newspaper or a magazine and/ or summaries, links, or photos, the mainstay of this blog is its fresh material focused on the life and career of Mae West, herself an American original.