Was MAE WEST really misquoted? Let’s find out. This is Part 8 of eight sections, the finale.
• • 1930s sex symbol Mae West has been misquoted for decades, book reveals • •
• • “I lived like a man, in some ways” • •
• • Stephanie Nolasco wrote: From 1954 until 1956 she toured the country with a nightclub act where she surrounded herself with young musclemen. One of her gladiators, Mickey Hargitay, would go on to marry another Hollywood blonde bombshell who found inspiration in Mae West — Jayne Mansfield.
• • Stephanie Nolasco wrote:  West’s last credit in films was 1977’s “Sextette,” where the actress played a role she knew best — — that of a glamorous silver screen sex symbol. West was 84 at the time. 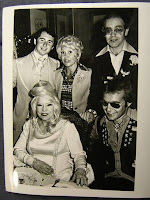 • • Stephanie Nolasco wrote: And the woman who personified the sexual innuendo had zero regrets doing things her way. “I lived like a man, in some ways — decided what I wanted and went after it,” West once said, as reported by the Los Angeles Times. “I’m not sorry. A friend of mine once wrote that I was ‘self-enchanted but never self-deceiving,’ and I hope that was always true. I got what I wanted. I still have it. Like I said a long time ago, ‘a real star never stops.’”
• • Stephanie Nolasco wrote: Mae West passed away in 1980 at age 87.
• • This article by Stephanie Nolasco has now concluded with this post, the eighth. Did you enjoy it?
• • Source: Fox News; published on Wednesday, 4 September 2019.
• • On Thursday, 27 September 1934 in Boston Herald • •
• • A review of "Belle of the Nineties" appeared in the Boston Herald on this date.
• • Overheard in Hollywood • •
• • Earl Carroll wanted Mae West and W, C. Fields for his new 'Vanities,' which opens May 6 in Boston before coming into the Winter Garden, NY, with a proposed $4 top. Not being able to get them, it will only be a $3 top affair with 'new legit faces.'
• • In Her Own Words • •
• • Mae West said: "Look, I haven't got a bookkeeper's mind. I can't remember what I paid for those things five or six years ago."
• • Quote, Unquote • •
• • A Singapore daily mentioned kissing and Mae West.
• • Mae West's First Kiss • •
• • Hollywood — For the first time in any of her films, Mae West has agreed to kiss a man.
• • The lucky man is Charles Winninger, who is playing the part of a social reformer in the film she is now making, "Every Day's a Holiday."
• • Said Mae in announcing the big decision: "I figured I owed just one kiss to reformers as a class. So Charlie gets it.  He's old enough not to take it too seriously."
• • Mae West is 45 and Charles Winninger is 53.  …
• • Source: The Straits Times; published on Sunday, 26 September 1937
• • The evolution of 2 Mae West plays that keep her memory alive • •
• • A discussion with Mae West playwright LindaAnn LoSchiavo — —
• • http://lideamagazine.com/renaissance-woman-new-york-city-interview-lindaann-loschiavo/

• • The Mae West Blog celebrates its 15th anniversary • •
• • Thank you for reading, sending questions, and posting comments during these past fifteen years. Not long ago, we entertained 3,497 visitors. And we reached a milestone recently when we completed 4,300 blog posts. Wow!
• • By the Numbers • •
• • The Mae West Blog was started fifteen years ago in July 2004. You are reading the 4311th blog post. Unlike many blogs, which draw upon reprinted content from a newspaper or a magazine and/ or summaries, links, or photos, the mainstay of this blog is its fresh material focused on the life and career of Mae West, herself an American original.