“Is MAE WEST Skidding on the Curves?” Asks Madame Sylvia, Photoplay's Beauty Editor, in the next issue. And her answer offers a wealth of practical advice to all women — young and old, fat and lean. Whether or not you're concerned over your own appearance, you'll thoroughly enjoy Madame Sylvia's keen, clear-cut comments in the November 1936 issue. This is Part 5.
• • If a famous movie star is not slim, to heck with dieting! • •
• • Sylvia wrote: They pointed to her and cried, "Look! She's not slender, yet she's popular, famous, wealthy, and do the men go for her! The heck with diets and exercises! Why should I slave?" And with a yanking down of the girdles over that hunk of fat on the upper thigh, they would say "I think men like women to have a little flesh on their bones."  A little — — did you get that!
• • Sylvia wrote: Of course, men like a little flesh on their women's bones. Of course, they don't like slats. Women must have curves and smooth hip lines Hollow faces, jawbones like razor blades, collarbones sticking out like coat hangers, flat chests and bony hips, ruin a woman's figure just as much as hunks of fat, lumps on the hips, spare tires around the middle, too heavy or sagging breasts and too many chins.
• • Object Lessons Drawn from Miss West • •  . . .
• • “Is Mae West Skidding on the Curves?” will be continued on the next post.
• • Source: Photoplay; published in the issue dated for November 1936.
• • On Tuesday 18 June 1935 • • 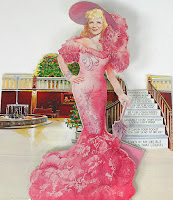 • • On Tuesday 18 June 1935, the Camperdown Chronicle in Australia printed an article. Their local Theatre Royal was going to feature, as its Wednesday attraction, Mae West in "Belle of the Nineties."
• • Camperdown Chronicle wrote: Mae West's amazing new contribution to screen history, "Belle of the Nineties," reveals the Paramount screen sensation more beautiful and alluring than ever as the foremost charmer of the gallant Southland of the Gay and Naughty Nineties.
• • Overheard in Hollywood • •
• • On Thursday, August 15th, 1940 Mae West made a donation to the Los Angeles Jewish Home and enclosed a moving letter that discussed her respect and admiration for the Jewish community.
• • In Her Own Words • •
• • Mae West said: “I am an egotist like all actors.”
• • Quote, Unquote • •
• • A seer mentioned Mae West.
• • Ashino wrote: A lot of people are unaware that Mae West was a major player in the occult realm as was Jackie Gleason (they were friends of the legendary Mary Gorham who ran a business that I inherited).
• • Ashino wrote: Anyway Mae West had a group that included Roddy MacDowell and a few others. It was based upon concepts of Egyptian Magick as filtered through some of the English Groups and the influence of Wynn Wescott, etc.  …
• • Source: Unverified post on a chat board;  published on Sunday, 5 August 2012
• • The evolution of 2 Mae West plays that keep her memory alive • •
• • A discussion with Mae West playwright LindaAnn LoSchiavo — —
• • http://lideamagazine.com/renaissance-woman-new-york-city-interview-lindaann-loschiavo/

• • The Mae West Blog celebrates its 14th anniversary • •
• • Thank you for reading, sending questions, and posting comments during these past fourteen years. Not long ago, we entertained 3,497 visitors. And we reached a milestone recently when we completed 4,200 blog posts. Wow!
• • By the Numbers • •
• • The Mae West Blog was started fourteen years ago in July 2004. You are reading the 4237th blog post. Unlike many blogs, which draw upon reprinted content from a newspaper or a magazine and/ or summaries, links, or photos, the mainstay of this blog is its fresh material focused on the life and career of Mae West, herself an American original.