“Is MAE WEST Skidding on the Curves?” Asks Madame Sylvia, Photoplay's Beauty Editor, in the next issue. And her answer offers a wealth of practical advice to all women — young and old, fat and lean. Whether or not you're concerned over your own appearance, you'll thoroughly enjoy Madame Sylvia's keen, clear-cut comments in the November 1936 issue. This is Part 3.
• • Box Office ratings shift • •
• • Sylvia wrote: She was one of the Big Ten at the box office that year. Now, she's number . . . well, I can't tell. I haven't got my specs. What happened?
• • Sylvia wrote: My silvery voice could be heard saying, at that time. "Yes, she's a riot. But for my money, she should take off twenty pounds."
• • Sylvia wrote: People said to me. "Oh, then she wouldn't be Mae West!" 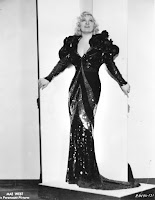 • • Sylvia wrote: "No?" said I. "Who else would she be?"
• • Sylvia wrote: "But her plumpness is becoming — she needs that buxom figure for the parts she plays."
• • Sylvia wrote: "I'm all for busty," said I, "but plumpness is an insidious thing. It sneaks up on you. It becomes just plain fat. You are fat before you know it."
• • Mae skidding on the curves • •  . . .
• • “Is Mae West Skidding on the Curves?” will be continued on the next post.
• • Source: Photoplay; published in the issue dated for November 1936.
• • On Friday, 14 June 1991 in T.L.S. • •
• • An article "The invention of Mae West" written by Graham McCann was published in The Times Literary Supplement, No. 4602, issue dated for 14 June 1991.
• • Overheard in Hollywood • •
• • Author Charlotte Chandler reportedly befriended Mae West just before the star’s death in 1980. This book, the result of interviews, is filled with oddly meandering and not-always-cohesive thoughts, memories that are viewed through multiple pairs of rose-colored glasses, strange scenarios (one, in which Chandler awkwardly wears black lingerie belonging to the almost-90-year-old West), and even more tiresome bragging.
• • In Her Own Words • •
• • Mae West said: "Yes, they kinda went for me."
• • Mae West said: "I got in everyone's hair asking questions. Why this and why that? I was in a strange land and I had to learn the tricks."
• • Quote, Unquote • •
• • Photoplay Magazine mentioned Mae West.
• • Kathleen Howard wrote: I lunched with Travis Banton of Paramount and asked him what was in his mind for fall wear. He is working on "Personal Appearance" for Mae West, and on the new Claudette Colbert picture "Maid of Salem."
• • Kathleen Howard wrote: For Mae West, Travis Banton has made a zebra coat. He says the black lines form a logical and striking back design. The clothes for Claudette will doubtless be interesting as he is anxious to try the softly gathered skirt which "does things" on the screen . . .
• • Source: Photoplay;  published in the issue dated for October 1936
• • The evolution of 2 Mae West plays that keep her memory alive • •
• • A discussion with Mae West playwright LindaAnn LoSchiavo — —
• • http://lideamagazine.com/renaissance-woman-new-york-city-interview-lindaann-loschiavo/

• • The Mae West Blog celebrates its 14th anniversary • •
• • Thank you for reading, sending questions, and posting comments during these past fourteen years. Not long ago, we entertained 3,497 visitors. And we reached a milestone recently when we completed 4,200 blog posts. Wow!
• • By the Numbers • •
• • The Mae West Blog was started fourteen years ago in July 2004. You are reading the 4235th blog post. Unlike many blogs, which draw upon reprinted content from a newspaper or a magazine and/ or summaries, links, or photos, the mainstay of this blog is its fresh material focused on the life and career of Mae West, herself an American original.