“Is MAE WEST Skidding on the Curves?” Asks Madame Sylvia, Photoplay's Beauty Editor, in the next issue. And her answer offers a wealth of practical advice to all women — young and old, fat and lean. Whether or not you're concerned over your own appearance, you'll thoroughly enjoy Madame Sylvia's keen, clear-cut comments in the November 1936 issue. This is Part 1. 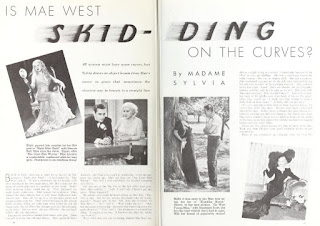 • • Sylvia wrote: Right, poured into sequins for her first part in "Night after Night" with George Raft, Mae stole the show. Upper, after "She Done Him Wrong," Mae became a comfortable, cushioned alibi for lazy girls. Plumpness is an insidious thing!
• • Sylvia wrote: All women must have some curves, but Sylvia draws an object lesson from Mae's career to prove that sometimes the shortest way to beauty is a straight line.
• • Sylvia wrote: Back in 1932, there was a small bit to be cast in Paramount's "Night after Night." A hard-boiled bit. Mae West took it. It was a comedown for her to play a bit after starring in her own stage plays, but Mae's eyes saw the gleam of movie gold and she gambled on the break.
• • Hollywood make-up artists dolled her up • •  . . .
• • “Is Mae West Skidding on the Curves?” will be continued on the next post.
• • Source: Photoplay; published in the issue dated for November 1936.
• • On Wednesday, 12 June 1946 • •
• • The Schuberts wanted to land "Come On Up" starring Mae West on Broadway, after her regional tour. They promoted this show with a full page of warm-hearted local reviews in Variety, in the issue dated for Wednesday, 12 June 1946.
• • Overheard in Hollywood • •
• • In 1935, Harry Dean, an investigator with the district attorney’s office, impersonated Mae West in an attempt to capture an extortionist who threatened to throw acid in her face unless she delivered $1,000 to the corner of Sunset Boulevard and Bronson Avenue. However, after four nights of the ruse, Miss West and her chauffeur dropped off the money.
• • In Her Own Words • •
• • Mae West said: "My sister's husband is the kind of guy whose accent has an accent."
• • Quote, Unquote • •
• • Photoplay Magazine mentioned Mae West.
• • KLONDIKE ANNIE — Paramount.— Mae West, rather offensively mixing sex with religion, turns evangelist in a clumsy tale of the Klondike gold rush. Victor McLaglen wallows harmlessly. You'll yawn. (April.)  …
• • Source: Photoplay;  published in the issue dated for July 1936
• • The evolution of 2 Mae West plays that keep her memory alive • •
• • A discussion with Mae West playwright LindaAnn LoSchiavo — —
• • http://lideamagazine.com/renaissance-woman-new-york-city-interview-lindaann-loschiavo/

• • The Mae West Blog celebrates its 14th anniversary • •
• • Thank you for reading, sending questions, and posting comments during these past fourteen years. Not long ago, we entertained 3,497 visitors. And we reached a milestone recently when we completed 4,200 blog posts. Wow!
• • By the Numbers • •
• • The Mae West Blog was started fourteen years ago in July 2004. You are reading the 4233rd blog post. Unlike many blogs, which draw upon reprinted content from a newspaper or a magazine and/ or summaries, links, or photos, the mainstay of this blog is its fresh material focused on the life and career of Mae West, herself an American original.