No other broadcast of the Charlie McCarthy show has generated more ink than the Sunday, 12 December 1937 broadcast starring MAE WEST.
• • The Mae West Blog has devoted its share of bandwidth to this phenomenon. However, an article written by Martin Grams, Jr. is so insightful and detailed that it eclipses other reportage. We’ll share a portion of his lengthy feature with you, dear Mae-mavens. Prepare to be amazed. This is Part 2 of 12 segments.
• • “The Edgar Bergen and Charlie McCarthy Show: An Episode Guide and Brief History” • •
• • The sex goddess accepted the booking but hated the script • •
• • Martin Grams, Jr. wrote: Mae West often wrote her own scripts and even produced her own movies, so she did have a financial interest among her radio appearances.
• • Martin Grams, Jr. wrote: NBC wanted to present something special for Miss West, so the powers that be turned to one of their most promising young writers, Arch Oboler. "That script came about this way," Oboler recalled on television’s The Merv Griffin Show on August 2, 1973. 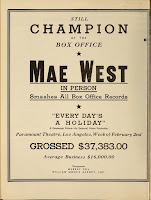 • • Martin Grams, Jr. wrote: "NBC called upon me one day in Westwood . . . they were in trouble on the Edgar Bergen show. I knew they always were in trouble on that show, but they were in particular because John Erskin had written a book called Adam and Eve. Miss West didn’t like it, Charlie didn’t like it, Edgar . . . didn’t matter [jokingly laughs], and Don Ameche was playing the lead.
• • Arch Obler said: I wasn’t interested in writing for Miss West • • . . .
• • This article by Mr. Grams will be continued on the next post.
• • Source: Radiogram; rpt by Old-Time Radio’s webmaster; posted on (undated).
• • On Thursday, 3 December 1936 • •
• • On Thursday, 3 December 1936, Mae West was seen in this ultra-feminine dress (designed by Travis Banton for "Goin' to Town") again in a newspaper’s Lux Toilet Soap advertisement. This charming portrait [16 inches X 10 inches] was printed in The Los Angeles Evening Herald and Express in black and white.
• • The exaggerated "rhumba" flounce on the sleeve is photographed horizontally in the movie scene to convey a robust attitude of nearly Napoleonic determination.
• • Overheard in Hollywood • •
• • The appealing costume designs for Mae West in “The Heat’s On” were done by Walter Plunkett.
• • In Her Own Words • •
• • Mae West said: "How would you describe me boys? I've been in Who's Who and I know what's what, but it'll be the first time I ever made the dictionary."
• • Quote, Unquote • •
• • Business Insider mentioned Mae West.
• • Aria Bendix wrote: An abandoned hotel in California was once a popular destination for Hollywood celebrities. Now some think it's haunted.
• • Aria Bendix wrote: The resort hosted baseball players like Joe DiMaggio and Hollywood actors like Charlie Chaplin, Mae West, and Clark Gable. Guests were fond of soaking in the hotel's natural hot springs or playing on its golf courses, which were among the first to be built on the West Coast.
• • Aria Bendix wrote: The resort closed in 1938, near the end of the Great Depression ...
• • Source: Business Insider; published on Thursday, 31 October 2019
• • The evolution of 2 Mae West plays that keep her memory alive • •
• • A discussion with Mae West playwright LindaAnn LoSchiavo — —
• • http://lideamagazine.com/renaissance-woman-new-york-city-interview-lindaann-loschiavo/

• • The Mae West Blog celebrates its 15th anniversary • •
• • Thank you for reading, sending questions, and posting comments during these past fifteen years. Not long ago, we entertained 3,497 visitors. And we reached a milestone recently when we completed 4,300 blog posts. Wow!
• • By the Numbers • •
• • The Mae West Blog was started fifteen years ago in July 2004. You are reading the 4,358th blog post. Unlike many blogs, which draw upon reprinted content from a newspaper or a magazine and/ or summaries, links, or photos, the mainstay of this blog is its fresh material focused on the life and career of Mae West, herself an American original.