No other broadcast of Charlie McCarthy's show has generated more ink than the Sunday, 12 December 1937 broadcast starring MAE WEST.
• • The Mae West Blog has devoted its share of bandwidth to this phenomenon. However, an article written by Martin Grams, Jr. is so insightful and detailed that it eclipses other reportage. We’ll share a portion of his lengthy feature with you, dear Mae-mavens. Prepare to be amazed. This is Part 10 of 12 segments.
• • “The Edgar Bergen and Charlie McCarthy Show: An Episode Guide and Brief History” • •
• • Arch Obler said that a lawsuit for plagiarism followed • •
• • Martin Grams, Jr. wrote: And with NBC publicly taking responsibility for the program that aired over their network, the good faith extended toward the listening public would be more apt to forgive and forget.
• • Martin Grams, Jr. wrote: But apparently damages were made.
• • Martin Grams, Jr. wrote: "Well, we were sued for plagiarism," recalled Oboler. "I don’t mean God called down – no this was from another part of heaven called Texas. A woman had written a story about Adam and Eve and she sued the network, NBC, for plagiarism.
• • Martin Grams, Jr. wrote: And Arch Oboler was the culprit.
• • Martin Grams, Jr. wrote: Since there were only two copies in existence, one that she had in her trunk, and the other one at the Library of Congress, it would have been necessary for me in those days to have gotten on a train and break into the Library of Congress. [Since I couldn’t] I was sued.”
• • The trial was set in New York • •  …
• • This article by Mr. Grams will be continued on the next post.
• • Source: Radiogram; rpt by Old-Time Radio’s webmaster; posted on (undated).
• • On Friday, 13 December 1912 in Variety • • 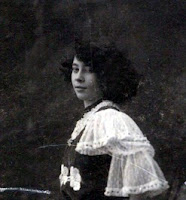 • • At Hammerstein's Victoria the stagebill was always crowded. In December 1912, the singing comedienne Mae West opened right after intermission, a difficult spot on the Program because the audience was still taking seats, waving to friends as they strolled down the aisle, and not paying attention to the act onstage. Variety noted, in their issue dated for Friday, 13 December 1912 that Mae West was at a disadvantage that evening and "some of her very good material went for naught."
• • Overheard in Hollywood • •
• • Mae West's style is too subtle for Hollywood, it seems. They don't get her. After seeing Babs West in "She Done Him Wrong" I went around shouting like a fan fanatic. Is that being sophisticated? Well, Richard Cromwell joined me. Thank God for youth and the finer susceptibilities. As I say, Hollywood couldn't make Mae out.
• • One of my favorite women protested my bubbling enthusiasm. "Why," she exclaimed, "Mae West hurls sex at you like a pie in the face!"
• • "Yeah!" I scream. "And isn't it funny!"
• • In Her Own Words • •
• • Mae West said: "I always wanted attention."
• • Quote, Unquote • •
• • The L.A. Times mentioned Mae West.
• • Review: Nayland Blake turns bunnies and shoes into meditations on sex, power and prejudice.
• • Christopher Knight wrote: Perhaps the most touching work is an assemblage featuring Madame, the wisecracking puppet created by comedian Wayland Flowers, felled by AIDS a year before Robert Mapplethorpe. Glamorous Madame, like Mae West and Sophie Tucker before her, was a vaudevillian mistress of the often-ribald double-entendre. She spoke her mind.  …
• • Source: The L.A. Times; published on Saturday, 30 November 2019
• • The evolution of 2 Mae West plays that keep her memory alive • •
• • A discussion with Mae West playwright LindaAnn LoSchiavo — —
• • http://lideamagazine.com/renaissance-woman-new-york-city-interview-lindaann-loschiavo/

• • The Mae West Blog celebrates its 15th anniversary • •
• • Thank you for reading, sending questions, and posting comments during these past fifteen years. Not long ago, we entertained 3,497 visitors. And we reached a milestone recently when we completed 4,300 blog posts. Wow!
• • By the Numbers • •
• • The Mae West Blog was started fifteen years ago in July 2004. You are reading the 4,366th blog post. Unlike many blogs, which draw upon reprinted content from a newspaper or a magazine and/ or summaries, links, or photos, the mainstay of this blog is its fresh material focused on the life and career of Mae West, herself an American original.